Healing of a Refugee
with Energy Therapy? 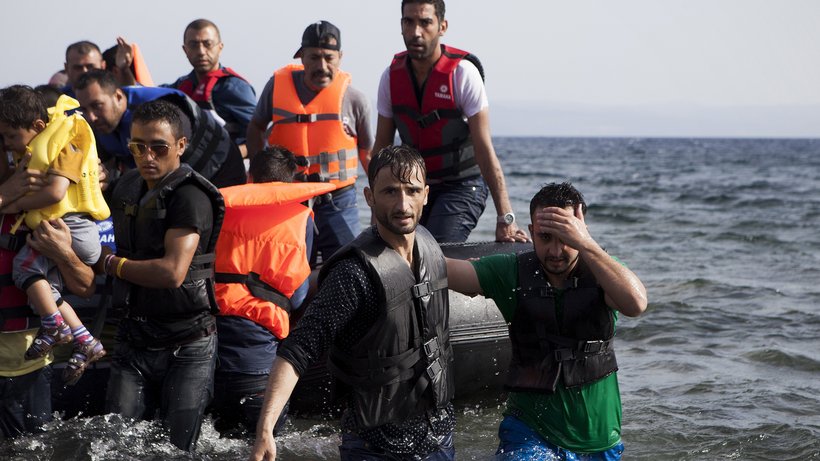 M. is not captured in the pictures of this article

A woman calls me in mid-May 2018 to make an appointment for a refugee from Syria. A refugee? Terrible images shoot through my head.

A few days later, to my astonishment, a normal young man comes into my office. He is 26.


Sometimes thoughts come up, like pushing others in front of the train or throwing himself from tall buildings.

His panic attacks are triggered by physical symptoms and cause him to repeatedly go to hospital, but nothing can be found. The thing that worries him the most is the feeling of being disconnected from reality and not knowing if what he is experiencing is real or not.

The psychologist he saw before he came to my place suggested that M. be prescribed psychotropic drugs by a psychiatrist.  His fear of becoming addicted prevented him from taking them, forcing him to seek an alternative.

When we start our first session a week later, he is suffering from a sore throat. He keeps asking me if he's really sitting here in my office. The fear of going crazy and getting mentally ill is enormous.

I give him a short introduction to EFT. Focusing on a topic is impossible. And so we tap on everything that comes to mind, such as the end of a relationship seven years ago in Damascus. His girlfriend, whom he had intended to marry, had gone astray with his friend and M. was still terribly disappointed, sad and angry about it.

His grandfather died a little later in a car accident.

Headaches, sore throats and stomach aches appear and disappear again, depending on what we're talking about. He learns about the connection between the psyche and the body, it calms him down.

In this first session, I inquire about a time when he was well. He needs a memory, a resource that can give him strength in the coming months.

He proudly describes a self-confident, smart, cute and honest 11-year-old boy. During this time in his life he was fine, he felt safe and loved.

This concludes our first session. I give him a little positive phrase for tapping at home.

It may seem absurd to work first with someone who has survived so many dire situations in his young years on his sadness over a lost love. Someone who saw his friends die along with many other people, someone who experienced the government's violence against the people of Damascus, who had been kidnapped and tortured and had to make a frightening and terrible trip to Europe.

It is the right concept, because his mood has improved and he is less dissociated than last time when he comes in for the second session.

We resolve the terrible images in his head of kidnapped children in Damascus, reduce the emotional and thus physical stress he feels when he thinks about the bombs.

He talks about his deceased grandmother, whom he greatly misses, and I give him the opportunity to say goodbye to her.

We use not only EFT, but also energy medicine in the next hours of treatment to rebalance his shattered energy level.

After just four sessions he says he feels 40% better than before our first session.

M.  suffers from loneliness and feels isolated without his family, which is partly in Egypt, even though he has to deal with many people every day.

He came to Belgium in 2015 and since then has worked in a social project for refugees, which he helped build. Responsibility for this project sometimes crushes him. He exhausts himself constantly. He cannot set limits, since he is convinced that he can’t say no; he doesn’t want to be rude.

But even that improves over time and he manages to pay more and more attention to himself.

He can’t let go of his anger at a former employee, he stirs up hate speech in his head and we have to tap for a while until the trouble is gone.

Not being connected to one's feelings, no longer having fun, lack of energy, fear of travelling and making mistakes are the next topics on our agenda.

An old trauma comes up as we address these issues: he was almost abused when he was six and was found by his father at the last minute. Feelings like shame, shock and guilt plague him and have to be let go of. He didn’t listen to his father and had gone off with an acquaintance.

A trip to Germany is pending. Shortly before, he calls me. He is terrified of being held by the police and not having a passport, even though he has one. These are understandable fears: people were deported without a passport in Damascus. After our hour together, he feels well prepared for his journey.

When I see him again after three weeks of vacation in August, a beaming M. tells me that for the first time, he felt like a normal person.

Bad nosebleeds, however, led to panic at night. As we tap, memories of gunfights, screams and gunfire in Damascus and the loss of his best friend come up; accompanied by the feeling of having to run away from his body, dissociation, anxiety and stress.

EFT helps again this time to dissolve the negative feelings associated with these memories. Even at home, he uses the technique when he is exposed to his fears alone. His friends are skeptical and can’t quite share his enthusiasm when he tells them about EFT.

In the next session, he tells me about two nightmares that have bothered him, which we analyze and explain together. Difficulty sleeping remains a recurrent theme. M. cannot fall asleep without having a TV on. In Syria, the television afforded him security and relaxation and distracted him from the sound of the bombs.

Sometimes it is enough to approach things in a logical way: in Belgium, there are no bombs, he is safe, which we say out loud while tapping. In the following session, he tells me that he did not need to turn on the TV to fall asleep.

Most of his symptoms have disappeared by now.

At the end of September, exhausted and tired, he comes into the practice, he has pushed himself too hard in his work and slept little.

He thinks about his own business and tells me about the relationship with a Syrian girl.

I suggest he make a big board where he can record all the activities he's planning and has rolling around in his head, so he does not have to think about these things at night and he can just have them visually in front of him. M. puts everything on the board immediately.

In the next session he comes with a headache. He does not know how he can build his own business while he has so much responsibility in his current job. He feels overwhelmed and has no idea where the money should come from. In addition, his brother has recently arrived in Brussels and he doesn’t have the time to stand by his side.

A constellation brings clarity and security. He sees that he can give up his current project. He needs a partner to start his own business and wants to complete a degree in business management.

His headache has disappeared after the session.

In the next session, the emotion code allows us to release six different emotions that prevent him from sleeping. He reports the following week that he slept deeply for at least two nights.

However, he says he has had the worst week imaginable. He has never worked so much! An employee got ill and he had to step in, had to do double shifts. He is astonished at himself, because he shouted at no one, did not feel overwhelmed and could stay calm.

In addition, he informed the Board that he would no longer be available for the project from April 2019 and has the verbal agreement to be able to independently continue a part of the previous project. He found a business partner. Now there is nothing standing in the way of his dream of having his own business.

M. has been in treatment for 6 months. Almost all symptoms listed at the beginning of this article have disappeared.

To go from being someone who has been so traumatized and unsettled and has experienced and seen so much suffering to being someone who builds his own business and with it his life with joy and confidence is a giant step.

We both hope that his story may serve as inspiration and give hope to many who are not feeling well at the moment.

He told me the other day:

"You have to believe in yourself and you always have the choice to see the positive as well."

I am very grateful and honoured to accompany this open, honest, courageous young man.

back to case studies